I returned home from the Netherlands one week ago, suffering from mild food poisoning. The culprit: taramasalata, a Greek dip made of cod roe, bread crumbs or mashed potatoes, lemon juice, vinegar and olive oil. I’ve always loved the stuff slathered on crunchy French bread, and I usually binge on it when I’m overseas, where it’s much more widely available than in the United States. Oops.

Based on my 20-year aversion to gin, after one night of extreme intemperance at university, I suspect my love affair with taramasalata may be over. I have yet to even toe dip back into seafood since my return because just the smell of fish knocks me back a step.

So, on Thursday I will give thanks that the holiday is known as “turkey” – and not “flounder” – day.

Luckily, the second half of my trip involved nicer hotels (especially the Grand Hotel Karl V in Utrecht) and fewer hours on my feet than Amsterdam, so feeling a little crummy didn’t louse up my itinerary.

I decamped Amsterdam, and headed to The Hague by way of Leiden — home to the oldest university in the Netherlands (founded in 1575), and temporary refuge of the Pilgrims. Leiden is a beautiful, quiet town with canals, one windmill (my first) and an impressive collection of antiquities at the Rijksmuseum van Oudheden – the national archaeological museum of the Netherlands.

The Hague was the most cosmopolitan and sophisticated destination of the trip. I stayed in the Noordeinde neighborhood – the royal palace was right around the corner – and shopped until I nearly dropped. The city offers a fine mix of upscale chain stores and high-end boutiques, all surrounded by cobble stones and centuries-old gable houses. Unfortunately it was here that I patronized Marks & Spencer, purveyor of the offending taramasalata – hereafter referred to as “the dip that shall not be named”.

Of course, I didn’t JUST shop and eat. I visited The Hague’s greatest gem, Mauritshuis – a tiny museum chock full of works by Dutch masters. (Tip: If you go, be sure to invest in the audio tour. It covers close to 50% of the artwork.)

I also toured the Museum de Gevangenpoort, a 15th century prison complete with a hostage room for debtors (this predates workhouses), a torture chamber with tiled walls to make post-interrogation clean up easier, and a “farewell” chamber where prisoners sentenced to death ate their final meals, and said goodbye to their loved ones. I got chills picturing the place after dark.

My final stop was the university town Utrecht, with a side trip to ‘s-Hertogenbosch (“Dem Bosch”) on my second-to-last day. Both towns have lovely old market squares, nice shops, a pretty canal or two and – in the case of Dem Bosch – a magnificent church. St. John’s Cathedral (Sint Jan) was a highlight of the trip.

One week later I am curled up in my comfy chair, watching football while sucking on my fifth Tums tablet of the day. It’s fun to reminisce with these photos.

It’s also good to be home.

As an aside, the Dutch speak great English and therefore have an knack for clever English shop names. I think “Knit Happens” could be my favorite: 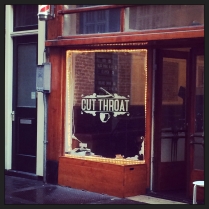 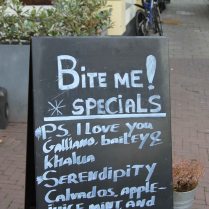