“I give you this to take with you: Nothing remains as it was. If you know this, you can begin again, with pure joy in the uprooting.”

― Judith Minty, Letters to My Daughters

Throughout 2017, I lived a life of not-so-quiet desperation. Of fear and loathing, even. Life is short, so I’m not someone who wishes time away… but I was relieved to see this December 31 roll around.

In January, I watched hopelessly as Donald Trump took office – cue the “fear and loathing” — then marched through sideways rain with 100,000 other Bay Area citizens to protest the man and his message.

Over the summer, I lost a cousin to a heart attack, and an uncle to cancer. At the same time, as Trump and Congress threatened to repeal Obamacare, I was blindsided by a breast cancer scare.

When the biopsy finally came back negative, I locked myself in the photocopy room at work and sobbed with relief. (I am blessed to have employer-sponsored insurance, yet more than six months later the medical bills keep rolling in.)

Finally, in November my 78-year-old mom suffered a significant stroke. Life has been stressful and crazy ever since.

So HELL yes, I am hopeful for a happier — if even more chaotic – 2018. That’s good because in March, after more than two decades in San Francisco, I’ll be relocating to CHICAGO.

I’ll be nearer my family in northeast Ohio — a 6 hour drive vs. a 6 hour flight? No brainer! – but there’s more afoot than that. For the past year or so, I’ve had a gnawing sense that it’s high time I SHAKE THINGS UP. 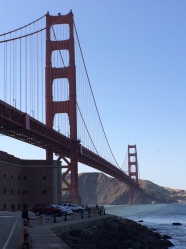 I moved to San Francisco straight out of grad school in New York. I had an apartment, but no job and just one friend in the Bay Area. When I tell that story, folks remark on how risky/brave it was – which never occurred to me back then. I had confidence that I’d find a job in a few months and meet new people. Everything would be fine, if I took it one step at a time.

Since then, though, I slowly lost some of my pluck and sense of adventure. I became cautious, and looked for a perfect confluence of circumstances — professional and personal – when considering a big change. I was too comfortable. I was feeling stuck.

Now it’s like I’m changing tires on a moving bus, which is both exhausting and exhilarating. I’m working (my job is coming with me), while simultaneously managing my mom’s medical appointments from 2,500 miles and three time zones away, purging my closets and researching moving companies.  I’m also breaking up with dentists, doctors and hairdressers I’ve been with for 20 years. (For some reason, those are the decisions that make the move seem most “real”.)

I’m planning a farewell tour of the Bay Area, but know I’ll barely make a dent in two decades of favorite restaurants, neighborhoods and friends. I’d like to slip up to Seattle for a few days, but may not have time.

Every day, I wake up a bit more excited about my Chicago adventure. I’ve signed a lease for an apartment on the North side, and started watching Bulls games. I bought a big, puffy down coat that reaches my knees.

I’m also mapping out my cross-country drive on Route 66. That drive is on my bucket list. CHECK! 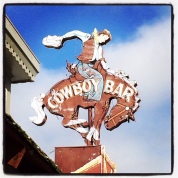 In my bones, I’m a Western girl – with the boots and old western DVDs to prove it. It’s tough to leave, but I figure there’s a condo in Austin, Santa Fe or Flagstaff waiting for me – in retirement, or maybe before. Who knows? The only thing that’s constant is change.

I’ll take the future as it comes, and keep an open mind — because change is good.

“A bend in the road is not the end of the road…Unless you fail to make the turn.” 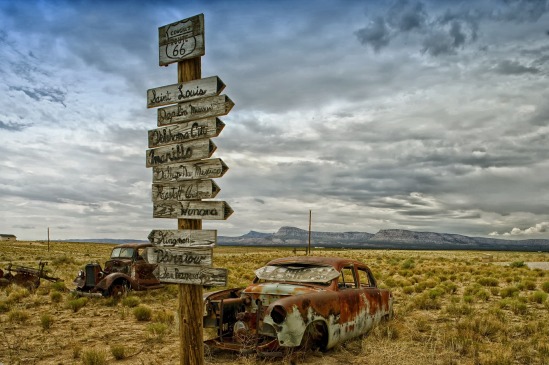 8 thoughts on “When the Spirit Moves You”