It’s been a long time since I’ve blogged — a LONG time. A bunch of seemingly important projects and commitments, during a particularly busy spring and summer, got the better of me… or the worse, depending on how you look at it. In retrospect I’m not sure how important all that stuff really was but… the cost is sunk.

So, I’m back in the blogging saddle. (Yee haw.)

This resurrection post features photos taken on a trip to one of my favorite California destinations: Mendocino County. I drove the 160-ish miles north last weekend to kick off what I’m calling my #BayAreaBucketList tour. I’m taking in new places and events that have always sounded amazing, as well as some old favorites like Mendocino.

I’ve got no plans to pull up stakes right now. I’m just making a conscious effort to better partake of the opportunities that exist around me in one of the biggest — and prettiest — U.S. states. We Californians often pay handsomely to live in the Golden State, so why not get our money’s worth? Or at least try to…

There’s no better time to visit Mendocino than around Labor Day – the unofficial start of the Bay Area summer.

Flowers near the Mendocino cliffs 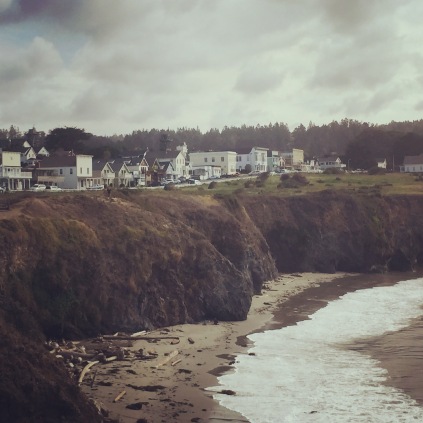 I spent last weekend in one of my favorite Northern California getaways, Mendocino. Approximately four hours north of San Francisco, this coastal town is heaven for anyone who really wants to escape the Bay Area rat race.  Its buildings and sidewalks harken back to the gold rush era, although it’s really an old logging town.  Mendocino was founded in 1850, and has a population of just over 800.

There are many inns in Mendocino.  My new B&B-of-choice is the Joshua Grindle Inn.  The rooms are spotless, the breakfasts are delicious and healthy, and the owners are low-key hospitable.  You can also get an amazing massage on site from Glenna Hunter, better known as Ms. Magic Hands.  (I think I am the only one who calls her that, but the name fits.)

My two-cents:  Avoid staying at higher-profile spots like McCallum House or the Mendocino Hotel.  They are OK – very pretty old buildings — but a little too self-congratulatory and a LOT too expensive.  The Mendocino Hotel in particular has only so-so food, and spotty service in the lobby bar.

Wireless reception in the Mendocino area is mercifully sporadic, and chances are you won’t have a TV in your room.  Each night I followed the Giants on my alarm clock radio, and then grabbed dinner at one of the great restaurants in the town.

Unfortunately, it was the foggiest weekend I’ve experienced in Mendocino, so I don’t think my photos do it justice.  Still….

I didn’t go to Mendocino JUST for relaxation.  My mini vacation was timed to coincide with the 85thAnnual Mendocino County Fair & Apple Show.  While there, I ate a hot dog on a stick and drank apple cider, and admired adorable kids in cowboy boots.  I petted many sheep and goats, and a couple of cows.  I also experienced my first rodeo.  The California Cowboys Professional Rodeo Association (or, CCPRA) Finals, to be precise.

As I took photos, my fellow spectators naturally assumed I was a rodeo buff.  This made me enormously proud, although I eventually had to confess that I had no idea how any of it worked.

The cowboys were handsome and rugged, but the truth was… I was always quietly pulling for the calves.  After dodging the lasso, they would dart around the arena until someone managed to drag them back to the pen. Those calves always looked a little smug, frankly.

My photos are pretty amazing — not because of my photographic talents but because rodeo is an intense and violent sport.  Pay special attention to the horses.  I think it’s safe to say, they don’t want to be broken. 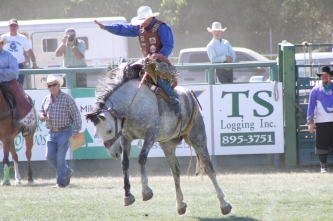 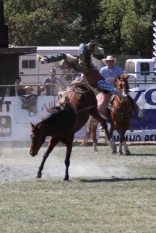