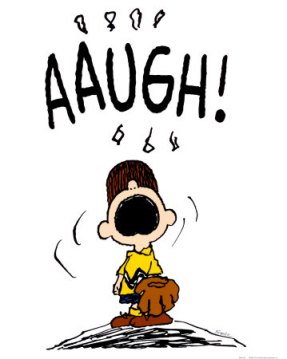 Last spring I did something I’d always vowed I wouldn’t; I got a DVR, and signed up for the overpriced Major League Baseball sports package on cable.  A bit extravagant, but it was worth it to watch my childhood team the Cleveland Indians play five times per week, in addition to my adopted home team the San Francisco Giants.

It’s a hard-knock life when your toughest decision of the day is which baseball game you will watch live, and which you will record.

Unfortunately, my first foray into sports packages was not all sunshine and home runs.  Comcast, er…um… I mean Xfinity, messed up my order — so for the first few weeks I was merely enjoying a free trial without knowing it.  Ah, those were heady, innocent days.  Then, one desperate night in April, I came home to discover… BAM!  NO MLB PACKAGE!

Don’t panic, Xfinity assured me.  We’ll fix it, although it’s too late to give you the early bird discount.  “The System” won’t allow it.

Um, I don’t think so.  I did my best imitation of a wheel in need of serious greasing, and eventually was awarded a credit on my next bill.  Play Ball!

I am puzzled by the billing options with sports packages.  Xfinity, theoretically, allows subscribers to either pay for a sports package in one lump sum, or break it up into monthly payments.   Why on earth would someone choose to pay for the whole thing up front?  Aren’t most folks familiar with the concept of the time value of money?

Of course I say “theoretically”, because when I have requested to pay in installments… things have gone terribly wrong.  In December, when the NBA lockout was resolved, it was time to support my Cleveland Cavaliers by signing up for the NBA sports package.  I asked to pay in monthly installments, but was charged the large lump sum on my first bill.

So it seems that someone at Xfinity, at least, is familiar with the time value of money after all.

It took a frustrating combination of phone calls, online chats and threats through clenched teeth to rectify the situation.  (They threatened to shut off my cable completely.  I vowed to call the The Better Business Bureau, which seemed to tip the scales of customer service in my favor.)

Both my after-hours phone calls, and my online chats, were handled by offshore reps with names like Ameriza or Amerigo.  Hmmm.

I can guess the subliminal message these noms de phone are meant to send. (If you love America, you won’t yell at me?)  And I suspect I will soon have a chance to test out my theory; it’s nearly time to commit to the 2012 MLB sports package.  I will again request to pay in installments,  Xfinity will probably get it wrong… and my complaint call will be taken by someone with a name that makes me want to stand up and salute.

Baseball is, after all, America’s pastime.

One thought on “Calling Ameriza!”