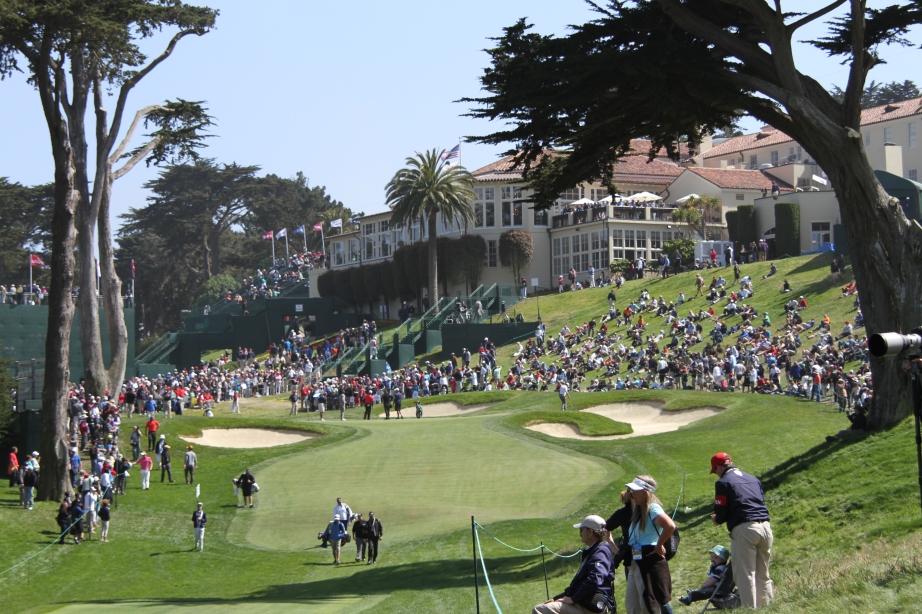 There’s something about Tiger Woods.  Golf fans love Rory McIlroy, Phil Mickelson and Bubba Watson, and call them by their first names as if they’ve been friends for years.  We know their practice rituals, and personal details.  But with Tiger, it’s different.  He is in a class by himself.

This was evident at the practice green, where I hung out for an hour or two on Wednesday, the final practice day of this year’s US Open.  It was quiet and low-key as 15 or so players, and their caddies and coaches, milled around.  I heard a few spectators ask the whereabouts of “Bubba”, and lament “Rory’s” late tee-off time.  Then things changed.  First, TV crews popped up all around – seemingly out of nowhere.  There was even a big television camera on a crane that was long enough to get footage on the opposite side of the practice green.  Where did THAT come from?

Then the idle chitchat among spectators stopped, replaced by murmurs of “He’s here. Tiger’s HERE.”  It spread like the wave at a Major League Baseball game.

To what can we attribute this reaction? It’s true, Tiger is a spectacular talent and when he catastrophically fell from grace, most of us couldn’t look away.

Perhaps fans want to see a resurrection of sorts.  Americans love redemption, almost as much as we love to watch the rich and powerful fall down off their pedestals.  Or maybe fans have always reacted with hushed reverence when they got a glimpse of Tiger.   If that’s the case – and the guy can’t enter a room, practice area, or public event without the earth’s rotation noticeably slowing – it might help explain why he came to see himself as above the rules and social norms the rest of us live by.

Many professional caddies smoke.  This is a little surprising if you work under the assumption that smoking may not be conducive to cardio-pulmonary health.  A professional golfer’s bag loaded with clubs probably weighs 30 pounds, and caddies have to run with those things hanging over their shoulders – often uphill.  Smoking and caddying seem sort of incompatible but…

Where there’s smoke, there’s Miguel Ángel Jiménez. The forty-seven-year-old Spanish golfer may smoke huge stinky stogies that seem to last for hours, but he’s clearly all about health and wellness.  Check it out.  No tight hammies on this guy!

They don’t call them practice days for nothing.  I went to golf tournaments in college, including a few practice rounds.  I guess I missed something, because I entered Wednesday expecting players to play 18 holes while following all the rules, as they got a feel for the course.  Not so.  There were mulligans galore, and on the greens each player probably took 10 practice putts from various locations.  On the 8th hole at Olympic, the green is on a hill.  Hit the ball short of the pin, and it’ll roll 20 yards or more back down onto the fairway.  Rory McIlroy, Ian Poulter and Graeme McDowell took turns testing this.

Golfers are outliers.  In his book Outliers, Malcom Gladwell demonstrates that excellence is no accident.  The average aficionado in anything — be it sports, music or computer programming — devotes about 10,000 hours to practice to get that way.  His hypothesis was supported on the practice green, where I watched players hit the same putt over and over — sometimes as part of precise drills.  I’d watch them miss eight inches to the left, then six inches, then four, then two until… success. Then they’d place the ball a foot or so from where it was before, and start all over.

No one would give me the time of day.  The US Open has a very strict “no cell phone” policy.  Security practically administers a TSA scan before they let you climb on a shuttle bus to the course, to ensure you aren’t smuggling one.  I missed having my phone and data access, but mostly I missed knowing what time it was.  Rising at the disorienting hour of 5 a.m. messed with my body clock, and it was too foggy to judge the hour by looking at the sun. Next time I’ll bring a watch.

And finally… Rory needs to get a grip.  Like golfers of every ilk, Rory McIlroy has perfected an insouciant lean-on-driver pose between shots.  Unfortunately, the bobblehead that shares his name and likeness — a gift from the San Francisco Giants — has not. 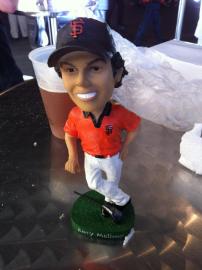 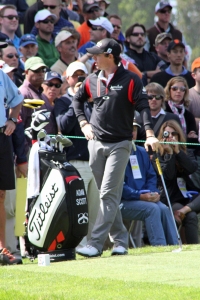 3 thoughts on “Practice Makes Perfect: Observations From the 2012 US Open”