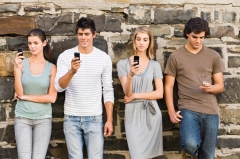 I have lived in my current apartment for nearly five years, and while a number of tenants have come and gone during that time, most of my neighbors have been here as long, if not longer, than I have.

I like many things about my building, but I think the best part is its size; it has approximately 30 units, so there is a community feel.  During my time here, couples have married, babies have been born and learned to walk and talk, and a few elderly tenants have passed away.

I don’t know everyone in the building; if a tenant doesn’t ride the elevator or use the laundry room, we’re unlikely to have crossed paths.  But if we’ve shared a common space or appliance more than once, we have chatted.  That is, with one exception…

I have ridden the elevator with a fellow tenant for five years, but still don’t know his name.  We regularly bump into one another in the laundry room, and even park in adjacent spaces in the garage, but have never even spoken.

Why have I never introduced myself to him, you ask?  Easy, it’s because he has a cellphone surgically attached to his ear at all times.  If it’s true that excessive cell phone use can cause brain tumors, this guy should see a doctor.  Pronto.

Over time, my no-name neighbor has left me fascinated and repulsed in equal measure.  What’s his story, anyway?  Who could he possibly be talking to at all hours of the day and night, on both weekdays and weekends?   At one point, I suspected he was just pretending, either to look absurdly popular or because he suffers from some sort of social disorder that causes him to panic when faced with neighborly chit-chat.  However, I can sometimes hear someone talking to him on the other end of the line, so I guess he isn’t faking.

I thought of him this week, when I saw a Good Morning America segment about Janell Hoffman of Cape Cod, who made her 13-year-old son Greg sign an 18-point contract before she would give him his first iPhone.

“Cyberspace is vast and more powerful than you. And it is hard to make anything of this magnitude disappear — including a bad reputation.”

This is my favorite part – seven of her eighteen points are related to good manners, and the importance of non-digital communication as a life skill.  It’s common-sense stuff we all should know, but many of us (like no-name neighbor) apparently do not.  Some examples:

The contract stipulates that Greg must turn in his phone every night at a specific time in deference to homework and family time, and he can’t have it back until the following morning.   He’s also encouraged to unplug sometimes.

“(Your iPhone) is not alive or an extension of you. Learn to live without it. Be bigger and more powerful than FOMO — Fear Of Missing Out… Keep your eyes up.  See the world happening around you… Wonder without Googling.”

If Greg meets his contractual obligations, in a few years he will have better digital manners than most adults three times his age.  When was the last time you had dinner with friends, and no one checked their text messages, emails or Facebook accounts?  When did you last eat alone, without checking in, posting, tweeting or texting?

I’ll admit, it’s been a while for me.  Maybe this is the New Year’s resolution I’ve been looking for.  If a 13-year-old can do it, and I can do it… perhaps there’s even hope for what’s-his-name.