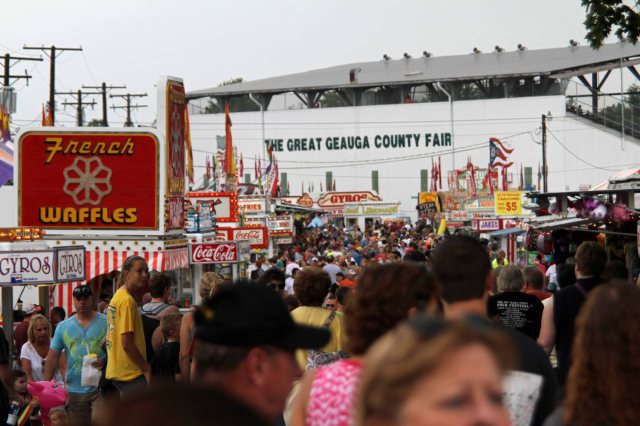 Today was my first full day back in the Buckeye State, where I grew up.  It was very hot, and humid.  I had forgotten that late summer days could feel like this.

My parents and I went to the Great Geauga County Fair.  First held in 1823, it is Ohio’s oldest continuous county fair – uninterrupted during the Civil War, Spanish American War, two World Wars and the Great Depression – and is one of the oldest existing agricultural fairs in the nation.

Students who participate in 4-H and whose livestock compete in the Fair are always excused from school on the Friday before, and pretty much stay on site for the entire Labor Day weekend.  Aside from feeding the animals and cleaning out their stalls, they sleep in barns on top of hay bales, shower on site, and eat concession food for four days straight. Then they sell their animals, and proudly post the price-per-pound above their stalls.

I am not sure I could sell a cow I’d raised from a calf – they have those big brown eyes, and long eyelashes — knowing it would end up at the butcher shop.  Then again I didn’t grow up on a farm.  Those 4-H kids are incredibly dedicated.

After spending four hours with cows, I’m sticking with salad for dinner.

When I was young, my family always attended the Fair on Sunday after church, when we were guaranteed to bump into friends.  I haven’t been back to the fairgrounds in nearly 20 years, but even today we encountered several folks we knew.

The day was cut a little short by sudden, heavy rain, but I still managed to squeeze in deep-fried local Swiss cheese on a stick, roasted corn on the cob, and a funnel cake – more carbs than I probably consumed all summer.

Despite the precipitous sugar crash I experienced when we got home (nap!), I have no regrets!

One thought on “Fair Weather”