I suffer from a condition common among film buffs: classic movie backlog. Weekend binge watching is often my only defense against my DVR purging important stuff to free up space. When that happens, I’m like a hoarder on a reality show who finds an old VHS tape in a skip in my driveway, after an intervention.

“HEY! I WAS GOING TO WATCH THAT SOMEDAY!”

Friday night’s DVR clean out featured Imitation of Life, recorded from Turner Classic Movies back in February. It’s a remake of a 1934 film based on a novel by Fannie Hurst, starring Claudette Colbert. (Full disclosure: I’ve neither seen the original, nor read the book.)

In the 1959 version, Lora Meredith (played by Lana Turner) is a widowed mother who dreams of Broadway stardom. One sunny afternoon at Coney Island, she encounters another single mom – Annie Johnson (played by Juanita Moore), who is African American – and her daughter Sarah Jane.

The women commiserate about the challenges of single motherhood, until Annie suggests she and Sarah Jane move in with Lora and her daughter Susie, so that Lora could be free to audition. Lora initially turns her down, because she can’t afford live-in help, then changes her mind when she realizes the two are homeless.

Over the course of the film, Lora’s singular ambition pays off. She becomes the golden girl of Broadway comedy, and later drama. All the while, Annie is her housekeeper, nanny, friend and support system. The women and their daughters upgrade to a beautiful home – where there are no lowly servants’ quarters — and Annie is financially secure for the first time in her life. 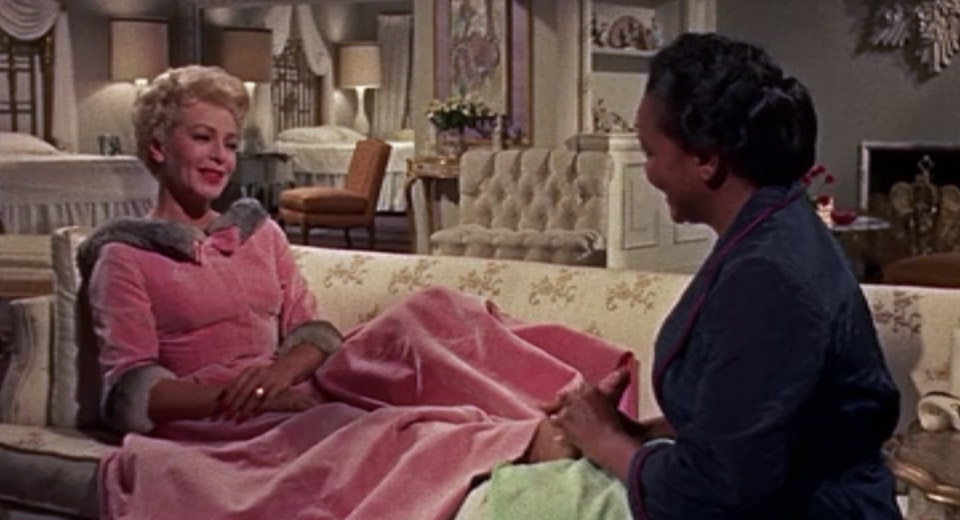 Imitation of Life has stuck with me for days. Is it a great film? Probably not, by most measures. Upon its release, a reviewer at the New York Times sniffed, “It is the most shameless tear-jerker in a couple of years.” Still, it got me thinking…

I wondered if the friendship between Lora and Annie was shocking for the time – but a Google search suggests it wasn’t. It would seem that audiences struggled more to relate to single motherhood – uncommon in 1959 — than to interracial friendship.

The aforementioned New York Times reviewer sneered, “There are two mothers in the situation—and no fathers, by the way; no parents of masculine gender to confuse the rich flow of mother love.”

Listen closely and you can almost hear the favorite anti-feminist boo-hoo: “Women think they don’t need men anymore!” (In case you were wondering, David Brooks was NOT the Times film critic in 1959. But that sure sounds like him, doesn’t it?)

An important storyline in Imitation of Life revolves around Sarah Jane’s light complexion, and her relentless determination to “pass”.

Early in the film, she refuses to play with black dolls – a nod to the Doll Test, conducted by psychologists Kenneth and Mamie Clark in the 1940s to assess the impact of segregation on the self-esteem of black children. Before long, Sarah Jane is passing. Everyone in her new elementary school class assumes she’s white – and she does nothing to correct this misassumption. Annie is devastated. Being black “is who you are”, she reminds Sarah Jane.

For the rest of the film, the young woman (played by Susan Kohner) stares across America’s racial divide, and longs for a different life. She can have it, if she reinvents herself as a white woman. She runs away, and disowns Annie. The consequences are heartbreaking.

The biggest surprise in the film is its treatment of Lora’s professional aspirations. She balances on the bleeding edge of self-aggrandizement and ambition, without coming across as a selfish shrew.

She sometimes neglects her daughter Susie, leaving her in Annie’s care for long periods – but Lora is generally portrayed as a kind employer and loving mother, and her bond with Susie is unambiguously strong.

Early in the film, she flirts with a Broadway agent to get a part, but draws the line at diving onto his casting couch. Later, she embarks on a long romance with a writer/producer who develops plays that turn her into a Broadway comedy star – then unapologetically breaks off their engagement when she sets her sights on more dramatic parts. She isn’t cruel, but she’s unsentimental and doesn’t shed a tear.

She also strings good-guy Steve along throughout the film. Each time they renew their romance, and she agrees to marry him, she receives a telegram – she’s been offered the role of a lifetime! Suddenly it’s, “Steve? Steve who?” In one instance, the engagement and breakup happen on the same afternoon.

I’m glad Imitation of Life narrowly escaped the dreaded DVR purge. I like a movie that surprises me, and challenges my assumptions about America in the decades before I was born. Most of all, I was intrigued by the film’s portrayal of an ambitious woman who enjoys success after success, without an eventual downfall because she chose her career over Mr. Right.

I can’t help but wonder how the New York Times would review the film today?

What’s more, I keep envisioning a 2017 remake, with the race of the characters flipped. What if an ambitious African-American woman befriended a down-on-her-luck single mom who was white?

2 thoughts on “Imitation of Life”