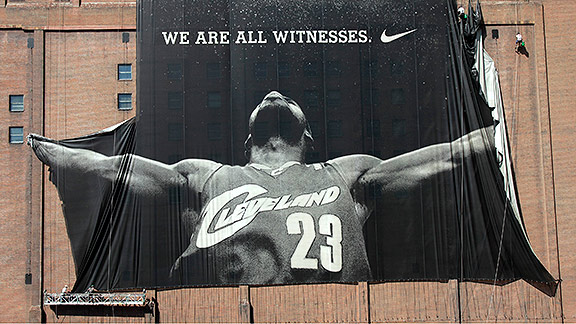 Four years ago
We were sucker punched, so
You can understand why I’ve been skeptical.
My hometown was spurned
Our allegiances turned
And our hero was yanked from his pedestal.

His burning ambition
Lay behind “The Decision”
To join forces with Bosh, and with Wade.
Fans shouted obscenities
And burned him in effigy
Any time the Cavs and Heat played.

But feelings evolved
And Cleveland resolved
To lure King James back in free agency.
They flattered, they fawned
They slept on his lawn
Would he come home, or turn us down gracefully?

Never say never
Knock me down with a feather
The optimists were not mistaken.
Chock full of forgiveness
And ready to WITNESS
This time fans have not been forsaken.

A conclusion forgone:
We’ll win with LeBron
And great things are going to happen!
The Q will sell out
And there’s really no doubt
That the Cavs will be NBA champions.

Unless you’ve been living under a rock this week, you are familiar with the imploding universe of Donald Sterling, owner of the Los Angeles Clippers. Most of the voices raised on the subject in social and traditional media have condemned Sterling for his racist views, and his spooky, self-involved, rich white guy perspective on the world. Nobody is really arguing that the man is anything except a blight on society. That’s a good thing. Phew.

Coverage around the recordings of a conversation between the 81-year-old Sterling and 31-year-old V. Stiviano, in which he admonishes her for posting photos of herself with African-Americans on social media, were fascinating. For starters, there was the news media’s classification of Stiviano as Sterling’s girlfriend, without even a touch of irony. I guess once the wife finds out about you, and sues you for fraud, your status is automatically upgraded from mistress to girlfriend.

Also interesting: When the story broke, I immediately wondered… Isn’t recording someone without his/her consent illegal in California? Granted I wasn’t particularly concerned about Donald Sterling getting duped right about then, but I did find it curious that this wasn’t discussed until DAYS afterward. Also no one in the media seemed too interested in speculating about who might have leaked the tapes. Would establishing that context simply have taken too long given our 24-hour news cycle?  Or was the story just too juicy to waste time questioning the motives of a potentially vengeful woman?

Sterling is a reprehensible bigot who deserves the shit storm raining down on him — that’s not the issue — but some bloggers and pundits wisely wonder about the slippery slope of personal thoughts, expressed privately and taped surreptitiously, bringing about personal ruin. It’s a fair question. It’s easy to support free speech when you agree with what the other guy is saying, but in our increasingly religiously and politically polarized society, can anyone be so certain he or she will never hold a view that’s considered repugnant by someone with power? Where does the right to privacy fit in here?

It’s always intriguing (in a train wreck kind of way) when someone educated, powerful and professionally successful has a view of the world that makes you wonder how he has managed to function in normal, polite society – let alone strike it rich. For example: Sterling’s narcissistic contention that he provides “food, and clothes, and cars, and houses” to his players.

Um, actually no one GIVES players those things. They hone their elite athletic talent over many years until they enter the NBA, where they receive huge flipping contracts dictated by the MARKET — not Donald Sterling. Then, they buy their own stuff with the money they’ve earned.

Isn’t it more accurate to say that thanks to their hard work and skills on the court, LA Clippers players have attracted fan dollars, which paid for the Bentleys, Rolls Royces and pricey condos that made it possible for Sterling to land the trophy girlfriend who ultimately brought him down?

One of the biggest head-scratchers in the Sterling fiasco is a Huffingtonpost.com blog post, About a “Girl” Who Refused to Just Shut up and Take Orders, by Dr. Peggy Drexler, described as an author, research psychologist and gender scholar.

(In the Sterling recordings, V. Stiviano wonders how a “scholar” like him can hold such narrow, prejudiced views. Sterling and Drexler are both scholars, huh? I’m thinking maybe there’s a new definition of “scholar” floating around I’m not familiar with…)

Drexler seeks to paint Stiviano as part victim, part Norma Rae-style feminist. She is extremely generous in giving V.’s intentions the benefit of the doubt. When considering whether she’s a gold-digger, and/or a vindictive ex, Drexler’s message is, don’t judge! What’s more, given Sterling’s bullying (“I don’t want to change. If my girl can’t do what I want, I don’t want the girl”), she positions Stiviano’s alleged decision to record the conversation, then leak it to the press, as brave and powerful because she refused to “just shut up and take orders”.

“She used her voice and her power to shine a light on abhorrent behavior… Her actions have resulted in real change… What’s more, you could argue that the woman on the recording didn’t really set up the man on the recording; instead, she let events play out in a way that seemed quite characteristic for the Clippers owner.”

Well technically, I think she used STERLING’s voice to shed that light — but why quibble?

I agree, Donald Sterling made his bed and should have to lie in it — but to suggest that Stiviano is some sort of modern-day Robin Hood for racial equality is laughable, since she took her stand only AFTER accepting a bigot’s $1.8 million condo near Beverly Hills, and several luxury cars.

I am reminded of the old saying about clocks: even broken ones are right twice a day.

Let’s all be glad that Donald Sterling has been exposed as the racist jerk he is, and hope he’s bounced from the NBA as soon as possible. The league, and the nation, will be better for it. But let’s also not celebrate V. Stiviano as the next Rosa Parks.

Instead, let’s just hope her 15 minutes of fame are nearly up. Unfortunately, I’m already getting a faint whiff of (*groan*) reality TV in her future.