Since CNN delivered an Open Championship spoiler via text alert at about 11 a.m., I figure there’s nothing stopping me from writing a quick blog post about two of my favorite professional golfers — Rory McIlroy and Rickie Fowler — while the tournament is still being televised in the U.S.

I remain a wee bit skeptical about Rory after he called off his wedding to tennis player Caroline Wozniacki in May, just a few days after the invitations were mailed. Seriously, he couldn’t have decided he “wasn’t ready for all that marriage entails” any sooner? The results speak for themselves, though: ever since rejoining the ranks of single folk, his level of play has been phenomenal, suggesting something (probably his head) just wasn’t right.

Besides, rumor has it that Wozniacki was prohibited from wearing high heels while dating McIlroy because she is two inches taller than he is. (She’s been tweeting photos of herself this week, wearing stilettos for the first time “in three years”.)  No man is worth that kind of sacrifice.

Wozniacki won a WTA tournament in Istanbul today. Rory is the newest Open champion.  He is 25 years old, she is just 24. Perhaps they both have emerged from their relationship as winners.  At a minimum, seems like they dodged a bullet.

I dug into my photo archive from the 2012 US Open for shots of McIlroy and super-nice-guy Fowler.  Aside from being very down-to-earth and gracious with fans, Rickie is a blast to follow around the course because there are always a few very young boys there who idolize him, and dress up in head-to-toe Puma gear. (Orange on Sundays, of course.) Adorable. 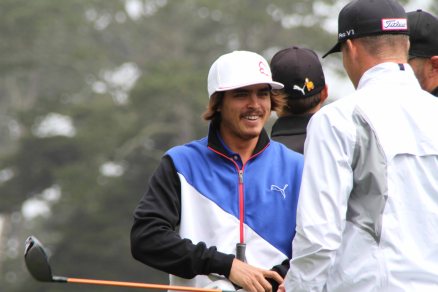 Rory McIlroy gives a pre-game interview to CSN Bay Area, before throwing out the first pitch at a San Francisco Giants game at AT&T Park. (June 2, 2012)

Rory McIlory prepares to throw out the first pitch at AT&T Park. It was Irish Heritage Night, and the US Open at the Olympic Club kicked off the following day. (June 2, 2012)

I have a strong aversion to heckling, both the giving and receiving of it.

When I was studying in Britain, a friend ran for student government — despite the fact that being heckled is a traditional part of the political process there.  I was horrified.  Who would voluntarily put themselves through that, for a position that doesn’t even pay?

Indeed, the Brits take their heckling seriously.  Based on what I see on C-SPAN, in Parliament there are lots of boos and hisses directed at whomever is speaking, with a bit of contemptuous clucking thrown in. In contrast, at President Obama’s 2012 State of the Union address, Mitch Daniels shouted “Liar!” and was nearly tossed out of chambers by the scruff of the neck.

British citizen hecklers are even tougher, and more specific.  In June, Prime Minister David Cameron got the full treatment from a volunteer at Olympic park: “Shame on you, David Cameron! You are crippling the poor in London. Shame on you!”

Based on my very unscientific sampling of British hecklers, I’d say they aren’t trying to get a laugh from the crowd… except at sporting events, especially soccer matches.  When facing a German team, for example, British fans might yell out “If you won the war, stand up.” Pretty witty, right?  And it has historical significance!  Hard to conjure up a speedy comeback to that one, in English or in German.

I have yet to encounter such clever wit at American sporting events.  I am convinced that in the United States, only the dumbest-of-the-dumb heckle… and they nearly always seem to be sitting near me.

Lowbrow heckling is difficult for me to understand, as most fans buy their tickets in advance and have plenty of time to prepare (and even test out) zingers if they choose to.  Yet once they let loose I am usually left wondering, “Is THAT the best you could come up with?”

An old standby heckle at baseball games involves someone chanting, “What’s the matter with (insert umpire’s name here)?” to which the crowd responds “He’s a BUM!”  Not really a side-splitter, but even when surrounded by kiddies there’s no real harm done.

A few weeks ago, I had the good fortune to catch a game from just behind the San Francisco Giants dugout, so close that I could have reached out and grabbed a player (if it weren’t for those pesky restraining orders).  That is Giants President & COO Larry Baer’s territory, and for the most part fans there are low-key – less because of Larry, than because they all want to look like they belong there.

There are always a few exceptions though, and at that game it was a fat, drunk, loud fool two rows behind me who I suspect did NOT purchase his ticket himself.  He was apparently delighted that he could scream insults that could be heard not just by players, but also on TV.  (One of his buddies called his cell, to let him know the folks back home in the double-wide were following along.)

His bellowed chant (to which only he responded) went something like:

“What’s the matter with Fowler?  He SUCKS!  YOU SUCK FOWLER.  YOU SUCK.”

Not funny or clever.  He even got the slow head turn and stink-eye from Momma and Papa Baer.  Yet a few random folks tittered… and he was thus encouraged to continue.  I’m not sure if my neighbors actually found him humorous, or if they just thought they were supposed to laugh.

This brings me to Sunday’s game between the Cleveland Indians and the Oakland A’s.  Before the game,  All-Star closer Chris Perez was antagonized by a heckler who completely set him up; When Perez lost his temper and let loose an obscenity-laced tirade, the heckler’s buddy recorded the exchange on his iPhone. (Note: If you have an issue with the F-bomb, this video is probably not for you.)

I’m particularly disappointed that Perez took the bait because… COME ON.  This knucklehead has apparently sought to provoke him at every Indians/A’s game played in Oakland for the past four years, and his heckling is PATHETIC.  Aside from calling Perez a REALLY bad word at the end, here is the best of his heckling.

“You’re garbage. You are garbage… Way to prove yourself, garbage man.”

Really?  This is the best he could do?  After pitching his 20th save in St. Louis on June 10, Perez threw up on the mound, in front of a stadium full of people.  That’s comedy GOLD.  What about something like, “Perez, you can’t save a game. You can’t even save your lunch“?  But the genius heckler from Oakland went with “get a haircut”?

Some of the best responses to heckling can be found on Twitter.  Sportswriters like Hank Schulman (San Francisco Chronicle), Buster Olney (ESPN) and Tim Kawakami ‏(San Jose Mercury News) are popular targets, as are athletes like golfer Rickie Fowler.  Most Twitter cyber bullies who hide behind their anonymity, and the lack of physical proximity to the guys they seek to antagonize, usually end up looking like fools — often because they can’t spell their, there or they’re correctly.

Ah meatheads on Twitter, and the wise ones who vanquish them. Two gifts that just keep giving.