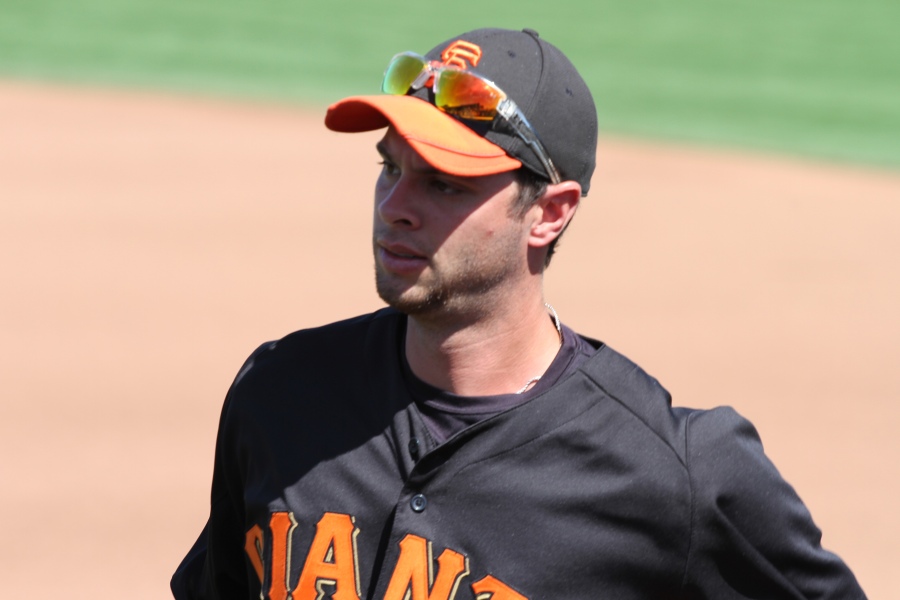 Day two of Spring Training was much less eventful than day one.  The only drama I experienced occurred when housekeeping forgot to clean my room.  I returned at around 5 p.m. after watching the San Francisco Giants play the Chicago Cubs, and realized that it hadn’t been touched.  At about 5:30, the very nice head of housekeeping realized her mistake, and stopped by to tidy up — but by then I’d already made the bed myself.  Seriously.  As discussed, I am a neatnik so I think you can guess my position on unmade beds.

It was fun to soak up the lackadaisical vibe at today’s game.  To start, the lineup was written on a white board near one of the entrances.  Anyone with a dry erase pen could have wreaked havoc by putting Sandoval at catcher, or something.  Lucky for Pablo, most fans do not show up at baseball games with whiteboard pens.

On my way out I double-checked – somebody had updated the whiteboard throughout the game, keeping it accurate.  Nothing fancy, but it got the job done.

The game was packed, maybe even a sell out, and I had a really terrible seat in the bleachers. It was hot, and we were all squished hip-to-hip.  My neighbors were nice, though, and everywhere I looked I saw sweet little boys sitting with their dads, sporting oversized ball caps and new baseball gloves.  They were so excited!

Buster Posey caught for four innings, to lusty applause.  Brandon Crawford looked a little sloppy.   Brandon Belt and Aubrey Huff signed autographs during warm up.  (The former smiled as he signed, the latter did not.)  Madison Bumgarner pitched pretty well – better than the score would suggest.

When I left during the seventh inning stretch to visit the dugout store, the Cubbies were leading 5 -1.  At some point in the final two innings, the Giants managed to score three more runs to nearly tie things up.  In other words, as San Francisco was showing their only offense of the day… I was busy buying one more Giants cap, and one more Giants t-shirt, that I don’t need.

It’s difficult to get too anxious, or too excited, about anyone’s performance in Spring Training.  Pitchers are tweaking their mechanics and testing new pitches.  Every inning or two, players get switched in/out of the game.   Of course, for some players Spring Training is a tryout that could determine whether they start the season in San Francisco, or in Fresno.  But it’s hard to get a sense of who is faring well in tryouts, unless you attend all the Spring Training games.

Tomorrow the Giants will play the Cleveland Indians, so it will be a day of divided loyalties.  Not yet sure which cap I’ll wear to the game – I brought one of each.  I don’t often get an opportunity to support the Tribe in person, so I am leaning that way.  Add to this the fact that my red Indians cap is a better match with the last clean shirt I have in my suitcase.   Ladies and gentlemen, place your bets.

Meanwhile, I’ll have to sleep on it.  Good night, all!

One thought on “I Made My Bed, Now I’m Blogging In It”