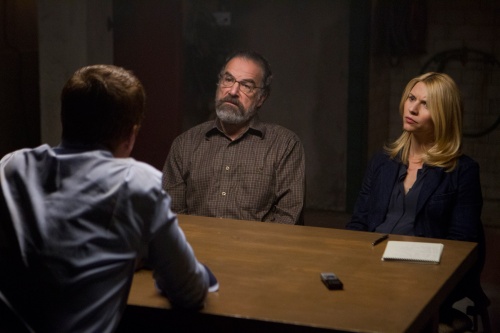 Well, the suspense is over (sort of).  Homeland’s second season concluded with some lovey-dovey mushiness between Brody and Carrie, several pretty impressive pissing contests (Quinn vs. Estes, Saul vs. Estes, both of which Estes lost), and a few seconds of unexpected pyrotechnics. Those didn’t work out too well for Estes either, come to think of it.

Overall I give Sunday’s season finale a solid B grade – this despite Carrie’s and Brody’s Sam-and-Diane stuff, which has never really drawn me in.  But an episode that is Saul-heavy is pretty much guaranteed above-average marks from me.  Mandy Patinkin is amazing; his scholarly glasses and sensible clothing, his witty jousting with Estes, his perfectly timed f-bombs (To Carrie: “You’re the smartest and the dumbest f—in’ person I’ve ever known”) and his shaking voice at poignant moments (like when his wife told him she was coming home) can counteract a multitude of other sins.

After weeks of painting Brody as a softhearted romantic, writers spent much of the finale trying to recapture the intrigue from Season One, i.e. is Brody a bad-guy terrorist, or just a victim?

There was something about his car keys that every conspiracy theorist on the internet seems to have picked up on, but I totally missed.  Apparently he passed his car keys to someone outside the memorial service.   He could have been a valet, a co-conspirator of Brody’s or a follower of Abu Nazir’s who wanted to set Brody up.  At any rate, some Homeland fans suspect that this shady keeper of the keys was behind the explosion at Langley.

If Brody wasn’t set up, how did all the networks wind up with his taped suicide confession?

So many questions to be answered in Season Three… we hope.

Here’s a new plotline I’d like to see.  I think it’s safe to assume that Carrie will spend at least the first few episodes of the coming season trying to clear Brody’s name, while others seek to destroy him.  (How she will accomplish her part from within the walls of the CIA is anyone’s guess.)   Meanwhile, Brody will stay in Canada.

What about a Quinn/Carrie hook up?  At the proverbial water cooler, a colleague made a great point: Writers must have bigger things planned for Peter Quinn.  Rupert Friend is a fairly well-known British actor (check him out in Mrs. Palfrey at The Claremont) and too fantastically handsome to waste.  What’s more, Quinn clearly has a soft spot for Carrie, since he refused to kill Brody in part to spare her pain.

Bye-bye Sam and Diane, bring on a love triangle!

3 thoughts on “A Few Home Truths About the Homeland Finale”