No witty commentary today, due to writing time wasted searching for my USB cord to upload these photos.  Bottom line:  It was a good day one… and not just because I (obviously) found the cord.

Now, off to Goodyear to see the Cleveland Indians take off the LA Dodgers. (Boo Dodgers!) 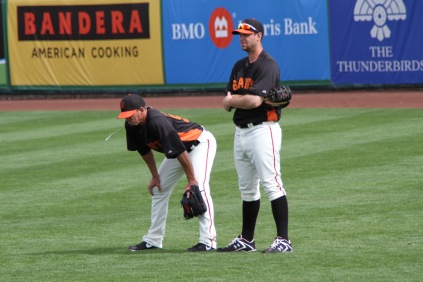 Photo of the day: Finally caught a player in the act of spitting. It’s all about timing…

A very sad spring training bratwurst. Must be the Arizona heat that shrunk it. 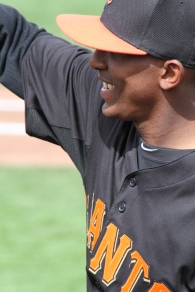 Joaquin Arias sees a friend in the stands.

Cleveland Indians center fielder Michael Bourn gets loose before the game vs. the Giants.

Michael Bourn nearly loses a finger, thanks to me.

Indians rookie Tim Fedroff wins the Hunter Pence award for exuding joy with fans. He forced his teammates to sign balls, calling them out if they didn’t. 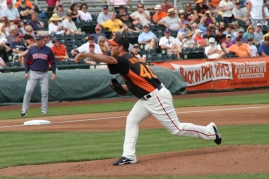 Indians catcher Lou Marson. More photos of him to come… 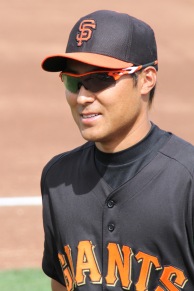 Everyone wanted to get a peek at Bruce Bochy’s son Brett. He pitched one inning.

Gregor Blanco prepares to toss a ball to fans.

Kensuke Tanaka was pretty good at second base.